How Much Do You Know About Thanksgiving? 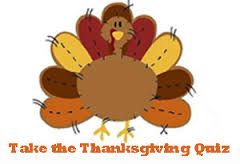 I’m so excited about Thanksgiving being right around the corner. It is a time when I reflect on my blessings – and YOU are included on my list! And I also enjoy being with family and friends, around a festive table. This Thanksgiving, we’ve prepared a little quiz about our American Thanksgiving that I’m sharing with you here. I’m planning to share it at my Thanksgiving feast, too – and perhaps you’ll enjoy doing the same. I bet you’ll learn something that you didn’t know before as you check the answers.

I hope you have enjoyed our quiz. All those at Talencio wish you a Thanksgiving filled with blessings.

Talencio, LLC is the preferred provider of vetted, accomplished professionals to the Life Sciences community, helping companies overcome hurdles and capacity issues. You can reach us directly at 612.703.4236 or email to: pnorbom@talencio.com.